Are You Using Apple Cider Vinegar? You Should Be!

How have you used apple cider vinegar in the past? Most people think to use it in marinades or salad dressings, but what if the benefits of this vinegar aren’t just in the taste – but in what this superfood can do for your body?

First we’ll look at why ACV is so good for you, down to how it’s made and the components that have health benefits when taken regularly. Then we’ll look at some of those benefits – from reflux, to congestion, to energy.

Why Apple Cider Vinegar Is So Good For You 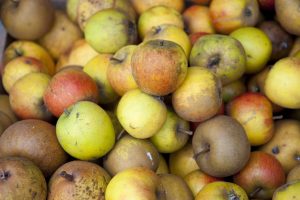 Apple Cider Vinegar is High in Acetic Acid, Which Has Potent Biological Effects

Vinegar is made in a two-step process, related to how alcohol is made.

The first step exposes crushed apples (or apple cider) to yeast, which ferment the sugars and turn them into alcohol.

In the second step, bacteria are added to the alcohol solution, which further ferment the alcohol and turn it into acetic acid… the main active compound in vinegar.

Some people believe that the “mother” is responsible for most of the health benefits, although there are currently no studies to support this.

Apple cider vinegar only contains about 3 calories per tablespoon, which is very low.

There are not many vitamins or minerals in it, but it does contain a tiny amount of potassium. Quality apple cider vinegar also contains some amino acids and antioxidants.

It has traditionally been used for cleaning and disinfecting, treating nail fungus, lice, warts and ear infections.

However, many of these applications have currently not been confirmed by research.

Bottom Line: The main substance in vinegar, acetic acid, can kill bacteria and/or prevent them from multiplying and reaching harmful levels. It has a history of use as a disinfectant and natural preservative.
– via Authority Nutrition

So with all that good-for-the-gut, antimicrobial action going on, how can you use apple cider vinegar to make yourself healthier? These are just a few of the many benefits that people have experienced. One of my favorites is as a solution for acid reflux – it’s such a natural, gentle way to solve a problem that plagues so many people!

Vinegar supports heart health in multiple ways. As explained in the Journal of Food Science:

“Polyphenols such as chlorogenic acid, which is present in high levels in apple cider vinegar, could inhibit oxidation of LDLs and improve health by preventing cardiovascular diseases.”

One study showed that vinegar could lower cholesterol in laboratory rats, while another study on rats found their blood pressure could be lowered by the acetic acid in vinegar.

Vinegar has also been found to decrease triglyceride levels and VLDL levels (the damaging form of cholesterol) in animal studies.

Apple cider vinegar helps to break up and reduce mucous in your body, helping to clear your sinuses. It also has antibacterial properties, making it useful for infections.

Apple cider vinegar works for a variety of skin ailments, from bug bites to poison ivy to sunburn. You can either apply it directly to the irritated area or try soaking in a bath with about one cup of vinegar added.

Apple cider vinegar contains potassium and enzymes to help banish fatigue. Plus, its amino acids may help prevent the buildup of lactic acid in your body, further preventing fatigue.
– via Mercola.com

So what about you? Are you won over to the ACV lifestyle yet?