Meditation Could Help You Better Cope With Pain

How Many People Have Chronic Pain?

Do you struggle with chronic pain? There’s a difference between acute pain that you experience from an injury, and chronic pain resulting from something like nerve damage, an illness, or some other longstanding condition. People are often prescribed opiates for chronic pain, but sadly this can result in dependence or further issues.

More and more studies are finding that meditation can have a measurable impact on chronic pain, reducing discomfort and improving quality of life. 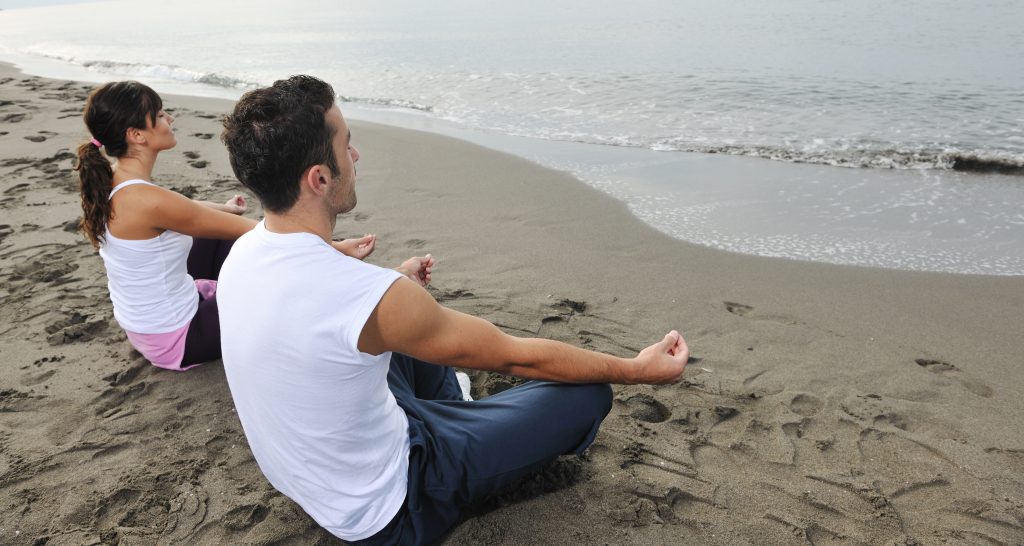 Persistent pain is not only life-altering for the patient, (causing missed worked days or early retirement, traumatic experiences, discomfort, and lack of sleep), but it is extremely costly to the nation.

These costs arise from medical expenditures for the pain, as well as for other conditions complicated by pain, and a hindering of the patient’s ability to work or function.

Aside from being costly, pain is difficult to manage. Narcotics are the mainstay for treating pain. Narcotics, also known as opiates, are a class of drug that affects the brain and helps reduce pain, while also producing euphoria.

In hundreds of studies conducted over the past decade, researchers have examined meditation’s effects on people, such as attention regulation, awareness of the body, depression, post-traumatic stress disorder, and addiction. Scientists have also studied the use of meditation as a treatment for pain. In these studies, meditation has been shown to help pain, sometimes significantly, though not cure it.

In research on meditation and pain, scientists have asked two questions: “Does meditation help?” and “How does meditation help?” The first question proved much simpler to answer. A Wake Forest University study conducted by Fadel Zeidan in April 2011 took 15 healthy volunteers and performed MRI scans of their brains while inducing pain. In the four days that followed, a certified instructor taught the subjects mindfulness meditation (in which the pupil is taught to focus on a sense, often his or her breath, while accepting transient thoughts). On the fifth day, the researchers scanned the volunteers again, once while not meditating, and another time while meditating, with pain induced during both sessions. The study showed an approximately 40 percent reduction in pain intensity ratings during meditation when compared with non-meditation.

The study discovered that by activating and reinforcing some areas of the brain used in pain processing, meditation has the overall effect of helping to reduce pain intensity in patients. Other theories on how meditation helps pain exist, including that it decreases stress, which in turn decreases pain.

“It worked for beginners,” he said excitedly. It seems a patient does not need to be a zen master of 10 years to reap the rewards of the practice.
– via The Atlantic

The information below was written specifically for those suffering from arthritis, but the benefits of mindfulness meditation go far beyond joint pain. This practice can help those struggling with any form of chronic pain by calming the body, reducing stress, and cultivating the ability to shift your focus and alter your mental state.

Despite powerful medications, people still struggle with pain and inflammation, both physically and psychologically. Meditation helps people with arthritis cope more effectively with their symptoms, says Alex Zautra, PhD, a professor of clinical psychology at Arizona State University in Tempe.

“The problems of these patients goes beyond what can be done with medicines we now have to treat them,” says Zautra, who has studied the effects of mindfulness/meditation therapies on people with RA and fibromyalgia. “Pain is not only a physical experience but an emotional one. Learning to manage those emotions is important for people with inflammatory disorders.”

While it’s not fully known yet how or why meditation can have positive effects on the neurological system and the sources of pain, brain scan evidence further cements the medical community’s growing acceptance of the benefits of meditation. “We are more certain than ever that this is for real,” Zautra says.

Zautra began studying meditation as a complementary therapy for arthritis after talking about subject with a rheumatologist. He and his colleagues studied 144 patients with RA and randomly broke them up into three groups: One receiving information on healthy living, one using standard cognitive-behavioral therapy for their pain, and one using a mindfulness/meditation practice.

Patients in the cognitive-behavioral therapy group showed the most improvement in self-reported pain measurements, as well as reductions in the levels of IL-6, an inflammatory cytokine (a protein involved in the immune response) in their blood. Those in the meditation group showed greater improvement in their ability to cope with pain, leading Zautra to conclude that these practices can help people with RA improve their symptoms, and cope more effectively with their disease. He also feels that people with arthritis that have psychological symptoms like anxiety or depression greatly benefit from meditation and similar practices.
– via arthritis.org

Have you ever used meditation to help cope with either physical or emotional pain?