Optimism Is A Choice 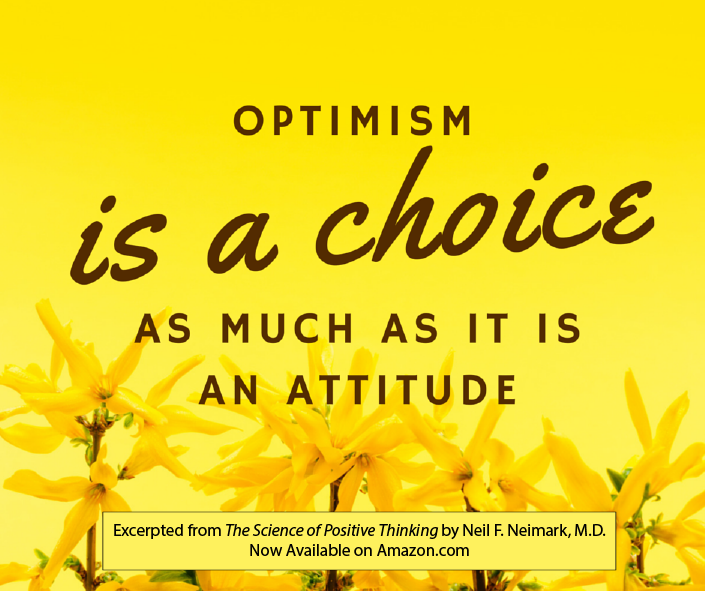 When it comes to optimism, the science is compelling … optimists are more likely to persevere in the face of difficulty, set a greater number of goals, be more successful in academic, social and professional situations … and maintain higher levels of well-being and mental health during times of stress.

And the best part is this … optimism is a choice as much as it is an attitude, so you can learn how to be more optimistic … and enjoy all the physical and emotional benefits of optimism.

On the scientific front, studies show that people who are optimistic have more positive moods, greater happiness and fewer physical symptoms for months after practicing optimism. Yes you heard that right. Most people think they are either an optimist or pessimist by nature—and there may be some predisposition—but optimism is also a state of mind that can be learned and practiced. You can learn to be more optimistic.

What’s the best way to increase your optimism?

Researcher Laura King, who developed the first ever experimental study of optimism used a powerful method called the “Best Possible Selves” exercise. In this study participants were encouraged to write (for 20 minutes over four consecutive days) about their best possible future selves. They were told to imagine a future as if everything turned out just as they hoped it would, with the realization of their life dreams and their greatest potentials. They could imagine and write about what that future would look like five, ten or even twenty years from now.

The results were remarkable—Dr. King found that those who wrote about their best possible selves (rather than about neutral topics) showed an immediate increase in positive mood and also experienced much greater happiness that lasted for several weeks after the study. They also reported fewer physical ailments for several months after the study. (King, L . A. (2001). The health benefits of writing about life goals. Personality and Social Psychology Bulletin, 27: 798–807.)

Another interventional study on optimism was done by Martin Seligman, Ph.D. and his colleague Gregory Buchanan, in which they performed a random-assignment placebo-controlled experiment on the 25% of the University of Pennsylvania’s freshman class who scored highest on the pessimism scale. They randomly assigned these students into one of two groups: 1) an eight week stress management seminar and 2) a no-intervention control group.

The treatment group received an eight week stress management course based on the principles of flourishing and psychological wellbeing, embodied in the acronym PERMA, where P stands for positive emotions (like happiness, optimism and gratitude); E stands for passionate engagement with life, referring to a form of concentrated attention where we are one with a project, a book or a conversation; R stands for relationships and social support, which includes life skills like kindness, forgiving, letting go, boundary setting and putting things in perspective; M stands for meaning, which is the spiritual side of life that says our life has meaning and purpose and that we have a vital part in helping create a better world; A stands for achievement or the accomplishment of something that brings value to us personally or to the larger community in which we live.

The results were remarkable—the seminar raised optimism markedly and lowered depression and anxiety! Specifically, the students in the stress management seminar: 1) raised their optimism level 2) lowered their depression and anxiety over the next thirty months 3) had better physical health than the controls (with fewer self-reported symptoms of physical illness, fewer doctor visits overall and fewer illness-related visits to the student health center) and 4) were more likely to go to the doctor for preventive checkups. In analyzing all the factors involved, the data suggests that it was the change in optimism itself that improved the outcomes for the stress management group. (G . M. Buchanan , C. A. R. Gardenswartz, and M. E. P. Seligman, “Physical Health Following a Cognitive-Behavioral Intervention,” Prevention and Treatment 2 (1999))

As you can clearly see, we are not talking about optimism as a form of naïve self-delusion, denial or wishful thinking but rather as a powerful, positive force for physical health and emotional well-being. We are talking about a mature optimism that is a choice as much as it is an attitude; a choice to make it a priority to seek out, expect and visualize the best possible outcome, even in the face of real difficulty, adversity and struggle.

In this way, when you choose optimism, you choose to engage an innate, powerful, positive force for physical health and emotional well-being that can bring you greater health, happiness and peace of mind.

Learn more in my new book, The Science of Positive Thinking: 5 Simple Steps to Reduce Your Stress & Restore Your Health, Happiness & Peace of Mind now available on Amazon.com.